Since Tony Abbott was elected, Australia has progressed with two trade agreements that place Australia at risk of Investor-State Dispute Systems (ISDS)  — one already signed with Korea (which definitely includes ISDS) and another close to agreement with Japan (which may include an ISDS).

ISDS (or Investor-State Dispute Systems) creates a parallel legal system that allows foreign investors to sue Australian taxpayers if Australia passes laws that reduce the value of their investments or their profits. 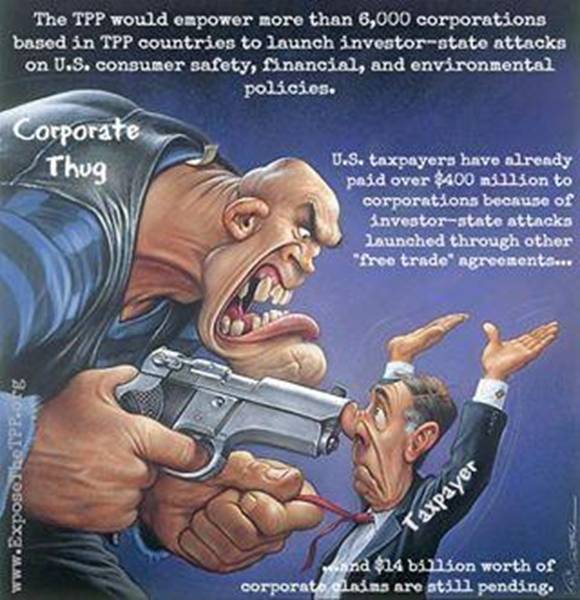 ISDS is so controversial (dangerous) that popular resistance against it is holding up the Transatlantic Trade and Investment Partnership agreement between America and the E.U.  Indonesia has just announced that it is terminating over 60 bi-lateral trade agreements due to its concerns about ISDS clauses in those agreements.

In Australia, Greens Senator Peter Whish-Wilson has introduced the Trade and Foreign Investment (Protecting the Public Interest) Act 2014 into the Senate. The Bill aims to protect Australian laws by banning ISDS provisions which enable foreign investors to sue governments (ours or others).

The Department of Foreign Affairs and Trade (DFAT) argues that the latest ISDS agreements are "improved" versions that protect Australia's interests and that new ISDS agreements will replace. Others argue that old ones will still be in place, so the new ones can not offer any improvement.These statements were made at the recent DFAT stakeholder meeting for the TPP held in Melbourne on March 26.  See the article TPP a high quality trade agreement - for multinationals, on the Independent Australia site for more information on this meeting and the TPP process in general.

There is an inquiry by the Senate Foreign Affairs, Defence and Trade Committee into the Bill and AFTINET has been asked to supply some points and references for people and organisations who want to make submissions.

Submission to the Senate Foreign Affairs, Defence and Trade Committee into the ISDS Bill close on 11 April 2014. The Reporting Date for the Report of the Inquiry: 16 June 2014, so public hearings will probably be held in May.

Why the safeguards won't work

Below are 6 points (produced by AFTINET, with references) explaining why the government’s “safeguards “in the Korea FTA won’t work, and the latest information about Indonesia, Germany and France opposing ISDS in trade agreements.

1. ISDS has developed expanded legal rights for investors which are not found in national legal systems

ISDS enables foreign investors to sue governments for compensation in an international tribunal if they can claim that a domestic law or policy “harms” their investment. ISDS has expanded beyond its original intention, which was to pay monetary compensation to foreign investors in the event of the actual expropriation or taking of their property by host governments. There has been an expansion of legal concepts like “indirect expropriation” and “fair and equitable treatment” beyond the scope of their meaning in national legal systems, to enable investors to lodge claims against domestic law or policy on the grounds that it reduces the value of their investment.

2. Increasing numbers of ISDS cases against health and environmental legislation

There are increasing numbers of cases in which foreign investors are suing governments for hundreds of millions of dollars over health, environment and other public interest legislation. Recent examples include:

3. Costs to government and taxpayers

Both the costs of running cases(OECD estimates an average of $8 million per case, with some cases costing up to $30 million) and the compensation awarded to foreign investors, (often hundreds of millions and in some cases billions of dollars) can discourage governments from proceeding with legitimate domestic legislation. The highest compensation award so far is $1.8 billion against the government of Ecuador. This is damaging for any government, but particularly damaging for developing countries, and can have a freezing effect on legitimate domestic legislation.

The disputes are heard by international investment tribunals, operating in under different sets of rules, but all of which lack the safeguards of national legal systems in the following ways.

5. Recent “safeguards” in ISDS clauses  to protect health, environment and other public interest legislation have not been effective

There are claims that recent changes to the wording of ISDS clauses in trade and investment agreements like the Korea-Australia Free Trade Agreement (KAFTA) are “safeguards” which will prevent foreign investors from suing governments over health, environment or other public interest legislation.

But the first “safeguard” sentence in the KAFTA reads: "except in rare circumstances non-discriminatory regulatory actions by a party that are designed and applied to protect legitimate public welfare objectives, such as public health, safety and the environment, do not constitute indirect expropriations" (KAFTA chapter 11, annex 2B). Many legal experts have pointed out that the phrase "except in rare circumstances" leaves a very big loophole, which recent cases have used to advantage. The second “safeguard” is a more limited definition of "fair and equitable treatment" for foreign investors (KAFTA chapter 11, clause 11.5.2 and Annex 2A). However tribunals have ignored these limitations and applied the previous higher standard. A third “safeguard” is a reference to the general protections for “human, animal or plant life” in article XX of the WTO General agreement on Tariffs and Trade (KAFTA Article 22.1). This article has only been successful in one out of 35 cases in the WTO which have attempted to use it to safeguard health and environmental legislation.

6. Increasing numbers of governments are withdrawing from ISDS

Increasing numbers of governments are reviewing and terminating their involvement in ISDS. These include members of the European Union like France and Germany, Brazil, Argentina and eight other countries in Latin America, India and South Africa. Indonesia has recently announced it will terminate all 67 of bilateral investment treaties.

Public Citizen,  (2013)  Only One of 35 Attempts to Use the GATT Article XX/GATS Article XIV “General Exception” Has Ever Succeeded https://www.citizen.org/documents/general-exception.pdf

"The US Trade Representative maintained that the US has pushed for 'a robust, fully enforceable environment chapter in the TPP', and Andrew Robb, the Australian Trade and Investment Minister, has vowed that the TPP will contain safeguards for the protection of the environment. But on 15 January 2014, WikiLeaks released the draft Environment Chapter of the TPP — along with a report by the Chairs of the Environmental Working Group. The agreement appears an exercise in greenwashing. Julian Assange, WikiLeaks' publisher, said the leak showed 'The fabled TPP environmental chapter turns out to be a toothless public relations exercise with no enforcement mechanism.' Far from being an ambitious 21st century agreement, the TPP provides little in the way of environmental protection of land, water, air, or the climate."

Background - What is TPP?

"Negotiations for the Trans-Pacific Partnership agreement involve 12 countries which account for up to 40 per cent of the world's GDP.

"Initial participants in the TPP on one side of the Pacific would include Australia, Brunei, Japan, Malaysia, New Zealand, Singapore, and Vietnam.

"On the other side are Canada, Chile, Mexico, Peru and the United States, with others able to join the pact later.

"One Australian politician concerned about the proposed agreement is Greens Senator Peter Whish-Wilson.

"In the last Senate session for the year, he moved a motion calling for negotiations on the agreement to be more open.

"'It's largely been negotiated in secret over the last four years and it's very important to the Senate especially to the Greens, and I understand also to the Labor Party and a number of stakeholders across this country that the details of this Trade Agreement become public. Free trade is often pushed as being important for this country but there's also risks and costs of free trade. Recently we had a leaked chapter by WikiLeaks, only one of 30 chapters, which caused a lot of concern and this is a move to take the politics out of the release of this Free Trade Agreement and make it available to the public.'

"About one-third of Australian exports -- worth about $100-billion -- currently go to countries that would be included in the proposed agreement.

"Alan Kirkland, from the consumer group, CHOICE, says it could leave Australian consumers worse off."

TPP - "high quality - for the multi-nationals 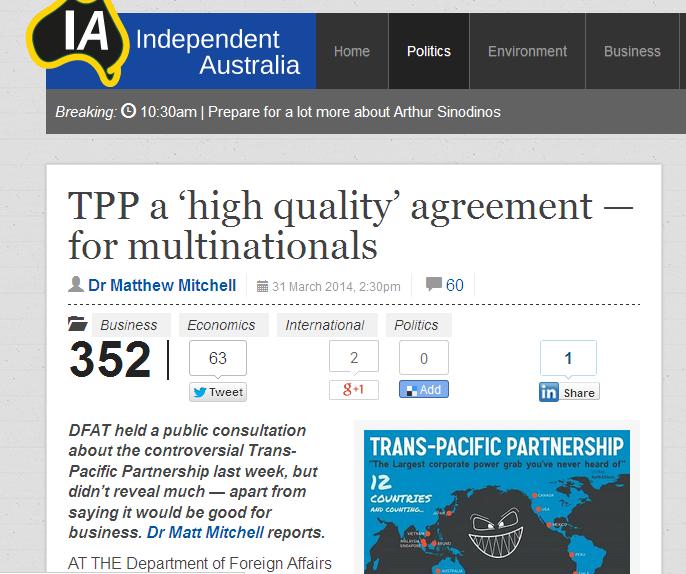