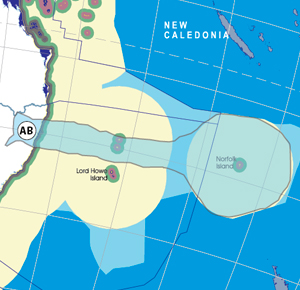 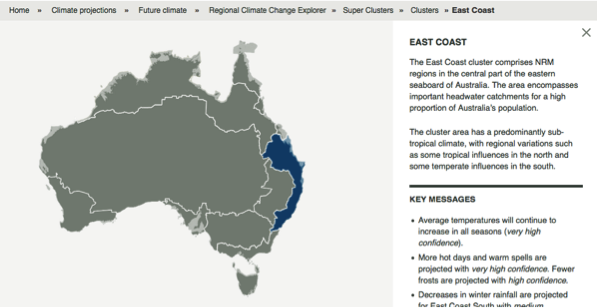 The CSIRO has regions for projecting the impact of Climate Change. See https://www.climatechangeinaustralia.gov.au/en/climate-projections/futur... This state, Casino State (AB), is one of the clear projections in a CSIRO cluster called "East Coast region". CSIRO's East Coast region coincides exactly with BloggerMe's Y,Z,AA,AB,AC,AE

NSW natural disaster zone grows: ELEVEN areas stretching from Byron in the north to Kiama in the south have be... http://bit.ly/13GLcW6

NSW natural disaster zone grows: ELEVEN areas stretching from Byron in the north to Kiama in the south have be... http://bit.ly/13GLcW6

North Coast bracing for heavy rain: THE NSW northern coast and ranges are bracing for flooding rain which star... http://bit.ly/XCswWB

Recently retired deputy secretary of the Treasury, Richard Murray, has proposed a radical plan whereby the existing state and territory governments would be abolished and the Commonwealth converted to a two-tiered administrative structure.

More roads closed: THE Newell Highway is now closed at the Queensland border and the Bruxner Highway has just cl... http://bit.ly/113nB59

Meredith Stanton ‏@CloudsCreek
Care about the region? Step up and serve with the RDA | Clarence Valley DEX http://www.dailyexaminer.com.au/news/care-about-the-region-step-up-and-serve/1692429/ …

Ben Cubby ‏@bencubby
Coal seam gas industry says it has been subject to a bomb threat in northern NSW. http://bit.ly/UhjWcb

FarmOnline ‏@FarmOnline
CSG protesters too loud for Hazzard: THE Planning Minister, Brad Hazzard, had intended to reassure the people of... http://bit.ly/TS3Oxz

Ben Cubby ‏@bencubby
Great story by @saffronhowden - how beach chicks got in the way of a Byron Bay resort. http://bit.ly/Vgb5Nr

FarmOnline ‏@FarmOnline
Cracking the market: WHAT started as a seachange by a Melbourne couple with the dream of building a regional bus... http://bit.ly/XGla7R