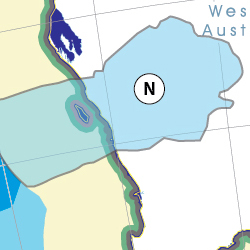 The CSIRO has regions for projecting the impact of Climate Change. See https://www.climatechangeinaustralia.gov.au/en/climate-projections/futur... This state, Meekatharra State (N), is one of the clear projections in a CSIRO cluster called "Southern & South-Western Flatlands region". CSIRO's Southern & South-Western Flatlands region coincides with BloggerMe's N,P,Q, and a tiny bit of X and a tiny bit of R.

FarmOnline ‏@FarmOnline
Weather watches look for hot tip at Meekatharra: IT'S perhaps no accident the tiny outback town of Meekatharra i... http://bit.ly/VIw6g3