One thing that the world of Twitter has taught me is that, if the Liberal Party is a very broad church, as someone or other is always saying, the Left is simply a place without walls or windows or doors. It is bound by nothing. But it took Twitter to make this clear.

I live in a town surrounded by mines, and filled with National Voters. These are people who have voted that way for generations, and will always vote conservative, come what may. There are a good few Liberals among them, very few Labor supporters, and some Greens, mostly farmers who have realized which side their bread is buttered on, but not many of them. Our local National Party member, Mark Coulton, will romp it in, yet again.

But mostly, here in my little town, people don’t really want to talk about politics. ‘Politicians are all the same’ ‘Politics doesn’t affect me’ and ‘Kate stop being boring’ are too often the refrain, if you mention anything political, even lightly. Except the National voters of course, who are loud and proud and very unkind to those of us who do not think the way they do. On election day, there is never a Greens table, handing out how to vote forms. And often no Labor people either. It’s Lib/Nat all the way. 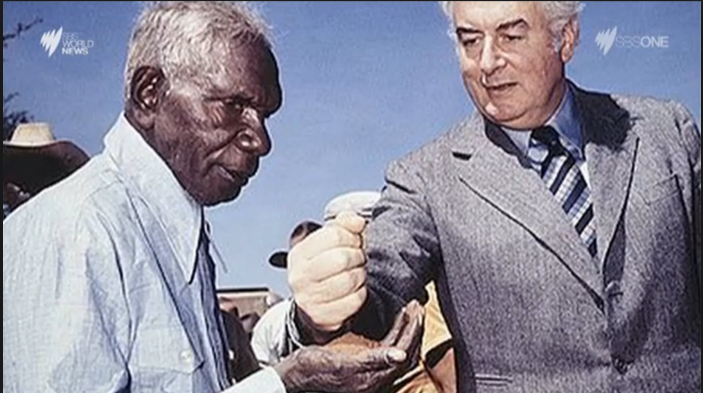 So, making my way onto Twitter, not knowing what to anticipate, was like finding a new home, where I least expected it.

Because I didn’t understand the true nature of the 'progressive side of the political spectrum' in this country, until then.

'Diverse' doesn’t quite cover it.

At this point I have been unfollowed and/or blocked by Labor supporters and Greens supporters. Been called a "Liberal mole", by both.

And that is all fine.

What is not fine is this: Many Labor supporters have the view that "once Bill Shorten is established as the Prime Minister, all will be well". Asylum seekers will then be treated better. And the poor will have a chance. Penalty rates will be secure. And Gonski will be funded for the whole six years.

But where is the evidence for this?

The evidence is quite to the contrary. 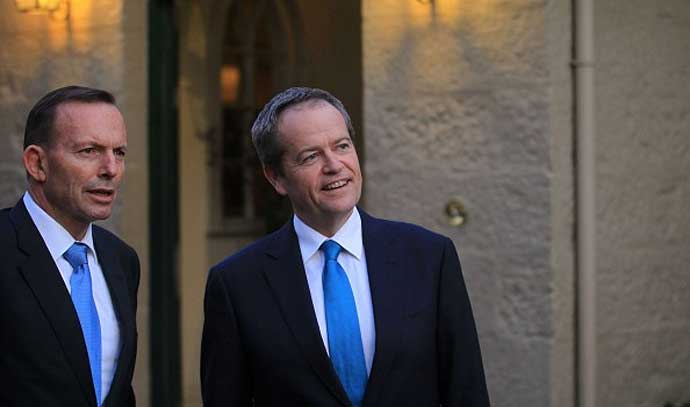 Labor have been marching side by side with the Liberals right through the notorious Abbott era, with Bill supporting Border Force, the inhumane detention of asylum seekers, the harvesting of meta data and now? Labor have bought into the whole neo-liberal LNP agenda, much loved of the IPA, and even serious, seemingly-centrist journalists. Labor must now "balance the Budget", they have to be "tough on spending" and "tough on cutting" and be a pale shadow of a conservative government ruled by a PM who likens "governing a country" to "running a corporation".

Tony Abbott once said that we are "open for business" and Malcolm has run with this. He appointed the ex-Immigration Minister Morrison, a man who is not on top of his Treasurer’s portfolio, and who is still the king of the "three-word slogan", having his weekly ‘chinwag’ with shock-jock Ray Hadley.

These people are fresh for the plucking, but mostly sail on with little attack.

Shorten could not even bring himself to mention 'climate change' recently, as he visited storm-battered areas of the country. And Bill actually does talk about climate change.

But the Liberals practically coined the word ‘politicisation’ and now any reference to anything they don’t want mentioned or any criticism of LNP policy elicits a knee-jerk attack response that tolerates no acknowledgment that these people live in a purely political world; heaven forbid that anything might be referenced in terms of politics.

Is this high farce? It has to be.

Why, why have Labor bought into this?

But the biggest problem is that dyed-in-the-wool Labor voters are perpetuating the myth that, once in power, Labor will do the right thing.

But as of now, Bill hasn’t even acknowledged the dire straits of people living on welfare in this country, the fact that it hasn’t been raised for decades and that poverty impoverishes and destroys the lives of the most needy. It was Bill who would not countenance any changes to hardline asylum seeker policy, at last July’s Labor conference. And now Bowen won’t confirm that penalty rates will be protected. Cuts to welfare are on the cards and those locked up offshore have no idea what a Labor government might do. Labor on a recent Friday waved through a $1b of cuts from the Abbott era and, not knowing what kind of Senate we might have, who knows? They might get passed. Maybe they won’t. But this is risky business.

We have two neo-liberal parties and, as disappointing as it is, perhaps it is to be expected.

What is not okay is for Labor supporters to delude themselves that Labor, any longer, aspire to Curtin's "light on the hill". 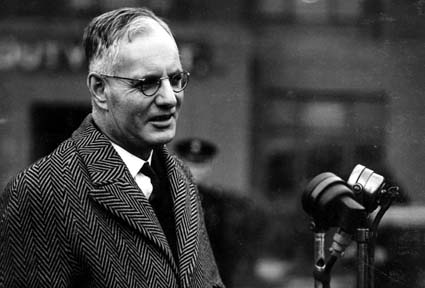 Gough Whitlam would not have truckled under on any agenda he believed in. And no, I don’t believe he would have let Murdoch push him around, either. He made mistakes, yes, but he was brave and reckless, and this Labor Party is not. They are pragmatic politicians. 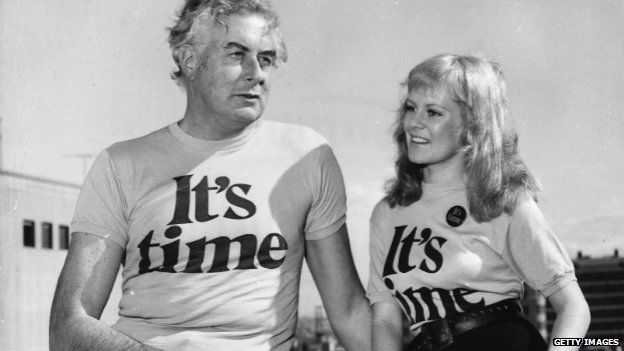 As Labor Twitterers keep saying, it is the "art of the possible" and of course, that is true. But shouldn’t we at least be "aiming for" the impossible?

This is 2nd in the BloggerMe Series "who2vote4 & Y?"
A series of blogs by independent thinkers
on the coming Australian federal election 2016

The Problem with Misguided Loyalty

It seems many people choose a party as though it was a football team and then give that party unconditional loyalty no matter what they do to the extent that even when the voter is aware that they are voting for a party whose policies have totally diverged from what the voter believes they still vote that way regardless, because it is their team. Tribal loyalty.

Some rationalise it, as you have identified, by thinking the party will somehow change policies after they are elected, notwithstanding their mandate, and the inescapable logic that the same disagreeable policies will be needed to be re-elected. And then there are those who have been totally absorbed into the Borg, who have said to me not that they support Party X but that they are Party X, even if they are not actually card carrying members.

Why are people then surprised that 'all parties are the same' when they can't bring themselves to vote for anything different. As First Dog said, the snake that voted for its own extinction.

Be writing a blog yourself! I think you have identified tribalism as a real problem in this country, where party loyalty overrides policy, overrides bad policy. Thank you. I like your name :)

Labor are not much different to Liberal on many issues

In the past the ALP would have used passion and energy to fight against injustice or to give fairness to a good cause. Now it is all about political opportunism. They have no respect for people who rely on them for just treatment.

The Rudd/Gillard government confirmed their lack of values and purpose. While they did some good things they abandoned so many that need help. The ALP adopted Howard's strategy of blaming people for their life circumstances. For example they insist it is the unemployed person's fault for not having a job, not the fact there is no job for them. Or the sole parent who finds themselves without a partner, without any regard to their real life circumstances. The ALP became indecent and remains indecent as they continue to support the dehumanisation and alienation of so many people.

Whitlam would talk about how a society could not reach its potential if it did not look after people from the poorest up. The ALP now looks after people who are doing ok in society for fear of losing their own jobs. They are indecent. The ALP continues to support the worst of the LNP social policies.

The ALP supports the welfare card which controls the freedom of movement and choice in every aspect of people’s lives. It is a social experiment, using live people, in behaviour control. The Labor Party of the past would have been passionately opposed to such a breach of Human Rights and denial of people to live with dignity. Now they support this abuse of people. The ALP has become indecent. Every one of them. No exceptions. I say this because they support the indecent treatment of their fellow Australians. No wonder the rape and abuse of asylum seekers is tolerated.
The ALP deliberately set out to deny people the right to live a decent life. They are self-interested career politicians. They leverage past reputations to ignore social justice and take care of the upper end of town.

Everything you say is true. I see on Twitter indications that people stopped following me/blocked me not because i was a Liberal shill, but because my attitude to Labor, a Labor voter (now former) criticising Labor was harder for them to swallow than any attack from the Right. You can't break ranks and the same is often true of those who support the Greens. This is sad and it is not doing their party any favours. Why would Labor ever change if those who vote for them never ask them to?

For me, Kate, your note is like a breath of fresh air.

Certain players are saying this is an evidence related piece and is offering opinion rather than evidence. But for me this piece expresses the frustration I have had for a number of years trying to raise key issues with Labor from the outside. I have raised the breaking of the UN convention on Refugees for many years with a complete silence from Labor. I raised an important issue, Intervention, with Julia Gillard & received not one indication that it had been received. Those who say that Labor will change policy after being elected are the ones who should be called upon to provide evidence, not you. There is no evidence to support their necessary contention, to justify their support.

And i know you are frustrated-your very erudite message spells it out. You are right. Imagine if Bill did get elected and then tried to do something about raising welfare or changing how we deal with asylum seekers. It would be Julia's carbon tax debacle all over again because he has no mandate. He's too afraid to even broach these subjects.

For understanding what i was trying to do here. Labor are much better than the Liberal Party, but they could be so much more.

Thank you Kate,
Neoliberalism is at the core of our trouble. Both sides of the fence are looking from the same perspective. Labor is just one half of the tag-team which pretends to be our polity.
It's a sad truth & I don't know why so many choose to have their lives wasted so.
Well done.