The Lost Dream of a Generation

The NBN has long been a dream of many Australians; fast ubiquitous broadband that can keep pace with our ever growing data needs. It was a modest plan in many ways, portrayed by opponents as the ‘Rolls Royce of broadband plans’. Nothing could be further from the truth.

This would lead us to ever faster speeds with minimal investment.

In fact, the flexibility of fibre to upgrade for decades, maybe even past a century, made it the obvious choice to keep costs down while still offering fast network speeds. 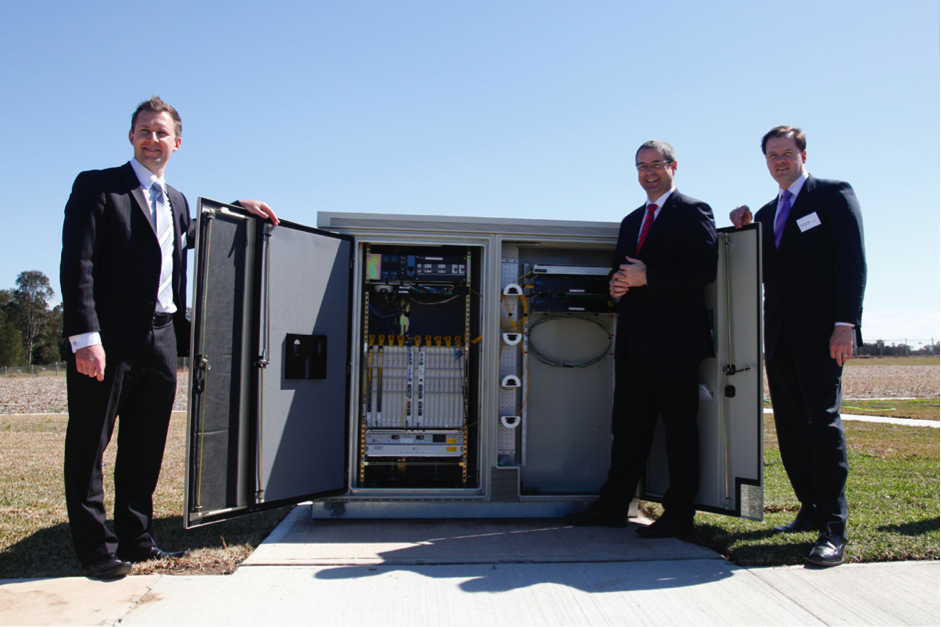 Conroy, Husic, & (I'm not sure who) standing before the first FSAM in a new development; See http://www.nbnco.com.au/corporate-information/media-centre/image-gallery...

Then along came Malcolm Turnbull, the man with a plan – to demolish the NBN.

Which leads me to ask: what the hell is going on at Labor HQ?

The policy Labor has released is as laughable as it is terrible.

For Labor to lampoon Turnbull’s MTM (Multi-Technology Mix) for 3 years, only to release a policy that continues the rollout of FTTN, and even worse, HFC (which will only offer ~1Mbps per user), beggars belief.

The policy, which is heavy on the attacks for a ‘positive policy’, clearly states Labor will continue the HFC rollout, they will also continue the FTTN rollout that’s currently underway. The policy is as vague as it can be about any increase in FTTP premises, using the same language many railed against when describing FTTN speeds, the dreaded ‘up to’.

So ‘up to’ 2 million more premises will get FTTP? Yeh, of course, even 1 additional premises delivers ‘up to' 2 million. While I have no doubt Labor intend to deploy FTTP, this may become more difficult than it seems by the time the FTTN rollout has been completed.

Not only will all the companies set up to deploy FTTP have either retrained staff, retooled their work crews, and ordered in copper-based equipment, or they’ll have gone bust waiting for fibre optic work. There will be thousands of qualified copper techs, and almost no qualified fibre techs left in Australia. Labor are betting that somehow they can turn around this MTM ‘fail boat’ at a later stage, when there just won’t be the infrastructure in place to do so.

This is the same problem Turnbull has been facing for the past few years, and why FTTN is taking so long to deploy; 80 areas have been delayed by, on average a month, some are out to six months.

What frustrates tech-minded people like me is that we’re being told to choose between two second rate policies that will hamstring Australia’s tech sector. Both parties can harp on about teaching kids to code, making maths and science mandatory, and becoming the ‘innovation nation’, but the reality is all this is for nothing if we don’t have fibre optic broadband.

Labor could make the bold step of writing off what’s been spent on FTTN and HFC, moving ahead with the FTTP rollout, and upgrading FTTN areas with decent broadband. Alas, Labor have gone with the small-target politics of releasing the policy late in the campaign, with few details, and an eerie similarity to Turnbull’s plan.

If Turnbull could cancel FTTP contracts after the 2013 election, I see no reason why Jason Clare couldn’t do the same after this election.

Labor could have made this election about the NBN, offering up a radical policy that, while costing more, put the NBN back on track. This could be enough to sway some voters (not me) to ignore Labor’s parliamentary voting record, or their refugee policy, but we’ll never know as Labor have opted for a safe, simple, and stupid NBN policy.

The whole policy is based on the ‘sunk cost fallacy’, believing it best to keep spending money on something people do not want, will not fulfil their needs, in the hope that it will save money later. The reality is, even if you throw out the $1.6 billion HFC deal, and most of the FTTN funding pipeline, you will still do better than continuing the rollout.

Maintenance costs of HFC and FTTN over the next 5 years alone would eat up any savings, add to this the loss in revenue due to 90% of the network being unable to achieve top tier speeds, and you’ve got a recipe for massive loses over the next decade. And even if you believe that the productivity commission will come up with a plan to deploy FTTP, it’s hard to argue this will be within 10 years of the rollout completing. We’re talking about tens of billions of dollars to go from FTTN and HFC to FTTP, not exactly ‘saving’ anything.

The importance of time

I know there’s a few arguing it will cause the rollout to take longer if Labor would commit to moving to FTTP straight away, and I say: so what? The Telstra Definitive Agreement does not need to be renegotiated, and really, who cares about Foxtel? Any delays would be minimal as the infrastructure is still around to cope with an increase in FTTP connections.

Alas, it’s too late for Labor to change their policy, so my advice to anyone wanting fast internet: move house, that’s what I’m going to do.

This is 4th in the BloggerMe Series "who2vote4 & Y?"
A series of blogs by independent thinkers
on the coming Australian federal election 2016

What is being done to reduce the costs of FTTP?

Where does the ~1mb/s per user for HFC come from? Yes I would like to see 1Gb/s and have people who are competing with me as a web application builder who have that much (regularly).

If the cost of FTTP was 'insubstantial' it would be a non issue. Any ideas where the costs come from? I am bothered that the NBN co is another telstra, spending billions on billing systems and front line 'support systems' that shunt you from one operator to another. Whatever goodwill there was to large service providers has been killed through disdain for customers and just fleecing them. Telstra offering phone plans with 5mb of data even recently. Half the money that could be spent on a decent service will be sucked into overhead making the transmission technology a secondary cost. Now, someone does have to work on 'changing the way we work' which I see as a billion dollar opportunity for TAFE & universities - not NBN.

Above-ground electricity is related backward Australian infrastructure problem. Then billions are being spent on piped gas to houses which seems like an obsolete approach. How can we spend money on something where electrical (induction, heat pump) technologies are more efficient and cheaper. e.g. http://www.rdv.vic.gov.au/regional-projects/regional-gas-infrastructure. Could allocate more intelligently?

The ~1Mbps comes from figures

The ~1Mbps comes from figures Ken Tsang posted on 16/06/2016. As you can see, during the coexistence period the speeds are capped at 993Mbps, shared amongst 900 premises (1.10Mbps per user). After coexistence period the speeds do go up, but not by much: 1168Mbps shared amongst 500 premises or 2.34Mbps per premises. A woefully low number, and these are all calculations that don't take into account any network overheads.

Most of the investment for the NBN has been spent on the transit network, the network between FSAMs (and ISAMs now) and the 121 POPs that RSPs connect to. The distribution network is a fair bit less than 50% of the total investment to date. If NZ can roll out FTTP for as much or less than FTTN, why can't Australia? It's clear NBN Co's Mal friendly board have been diddling the books when it comes to the cost to install both FTTP and FTTN, the former being 'estimated' higher, the latter lower. The thing is, when you look at FTTP vs HFC and FTTN holistically, you see that the lower maintenance costs with higher ARPU make FTTP the obvious choice.

I can't really speak to electricity or gas, other than being in Victoria gas is vital during winter, and nothing beats piped natural gas for cooking with. Even cylinders of LPG just don't cut it, not enough pressure.

The ~1Mbs/s is quite funny

As one of the comments to Ken's note say if they did put 900 premises on one loop there must be contention enough to make 1mb/s impossible. What is the protocol - some kind of token ring? I have experienced that it is slower during the day than early morning. The carrier would both assume that all premises would not be making heavy use of the network at the same time but networks don't deal with congestion linearly so would find it in a hopeless state before the knew it. Fibre handle it differently, up to the switch anyway. My experience with HFC that the ports in the street are a hopeless limitation. I complained that my network was down, the technician came around and found it had been unplugged with all the hub ports full. What did he do? Picked another plug and undid that and put ours back in. 1 call-out charge at a time I would guess.

I only comment on gas because of thinking through the fibre to the premise costs. They dig up the street and front yards multiple times at prohibitive expense (I read 12b for gas from Tristan Edis somewhere under a current program) it is probably spending on obsolete infrastructure (https://theconversation.com/ditching-gas-heating-and-cooking-could-save-...). Having a ducting company that has to deliver a multi-compliant duct each time would probably be even more expensive and not match any of the technical specifications. Shove the fibre up the gas pipe - too bendy. And still electricity is on the poles meaning that all the trees need to get severely pruned. There is no political or technical capability at the moment to solve these things in a more efficient way that I can see. We still have a major cost in the general area of 'ducting to the house'.

Looks like NBN does publish their financial statements which is refreshing around here. Abridged. I haven't dug into it. http://www.nbnco.com.au/corporate-information/about-nbn-co/corporate-pla...