The CSIRO & BOM have been cooperating on natural resource management (NRM) for a number of years and this has brought them into work with Climate Change authorities, Dept of Environment & Energy, Dept of Landcare, and State governments.

Their CCIA NRM Technical Report 2015 https://www.climatechangeinaustralia.gov.au/en/publications-library/tech... shows how important the ideas expressed in BloggerMe's FOWTOR model can be to getting it right.

Chapter 2 (authors John Clarke, Leanne Webb, and Kevin Hennessy) describes "NRM Regions", that are divided into "Clusters"; there are "Super Clusters" and "Sub-Clusters". "In this report Australia is divided up into 56 natural resource management (NRM) regions based on catchments or bioregions. These regions facilitate the development and implementation of strategic NRM plans, and regional bodies play a key role in delivery of government NRM programmes, including the National Landcare Programme. These regions are determined by the Commonwealth, State and Territory governments, with revisions from time to time. For these projections, a regionalisation scheme using the NRM regional boundaries has been used. The main projections regions are called clusters. To allow time for the extensive analyses required to develop the results presented in this Report (and associated products) it was necessary to settle on the cluster boundaries and retain those boundaries for the life of the project. The boundaries were fixed on 1 January 2013. In early 2014, the New South Wales government realigned their NRM regional boundaries. This affects the East Coast, Southern Slopes and Murray Basin clusters, and to a lesser extent the Rangelands cluster (see the relevant Cluster Reports for details). In most cases, the definition of clusters was based on NRM regional boundaries. However, the whole of the Northern Territory is a single NRM region as is northern Western Australia. It was important in the definition of cluster boundaries to recognise the distinct climatic and biophysical character of the far northern monsoonal areas. As such, the Northern Territory and northern Western Australia were split along their sub-regional boundaries delineating the Monsoonal North and the Rangelands clusters. In addition, the Cape York Cooperative Management Area was used to delineate part of the boundary between the Wet Tropics and Monsoonal North clusters. Figure B2.1 shows the NRM regions and other boundaries used as the basis for the regionalisation described in this chapter." p21

The NRM section makes reference to

"For the purposes of this Report and associated products, Australia has been considered at three levels of detail to suit specific purposes. The regionalisation scheme, developed in consultation with the Department of the Environment, defines eight natural resource management (NRM) clusters. This sub-division was informed by logical groupings of recent past climatic conditions (e.g. Stern et al . 2000), biophysical factors and expected broad patterns of climate change (e.g. CSIRO and BOM, 2007). Where possible, the cluster boundaries were aligned with existing boundaries of 56 NRM regions (Department of Agriculture, 2013, Department of the Environment, 2013) – these are described in Box 2.1 (above). The clusters are shown in Figure 2.1 and a summary of selected characteristics of each cluster is provided in Table 2.1. There is a Cluster Report describing the climate change projections for each cluster available on the Climate Change in Australia website." ibid. p.16 "Recent studies (e.g. Grose et al . 2010) and preliminary analysis of the model results in the early stages of this work suggested further sub-division was needed in some cases to better capture the important patterns of projected change. In light of this, five of the eight clusters were sub-divided (Figure 2.2). Projections at this scale, called sub-clusters, are also more useful for impact assessment and adaptation planning." (ibid. p17) 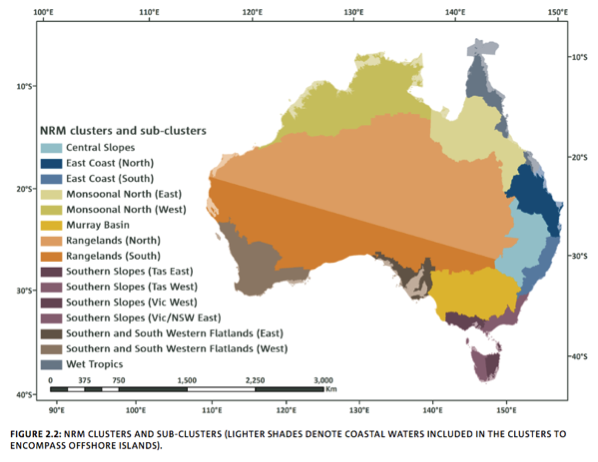 "We have also developed a broad-scale regionalisation of Australia by amalgamating the NRM clusters into four super- clusters: Northern Australia, Eastern Australia, Southern Australia and Rangelands (Figure 2.3). This regionalisation is used within this Report (particularly in Chapter 7) to describe climate changes at national-scale while permitting representation of differing projected climate changes for the major climatic zones. The relationship between the three levels of sub-division is shown in Table 2.2." (ibid. p19) 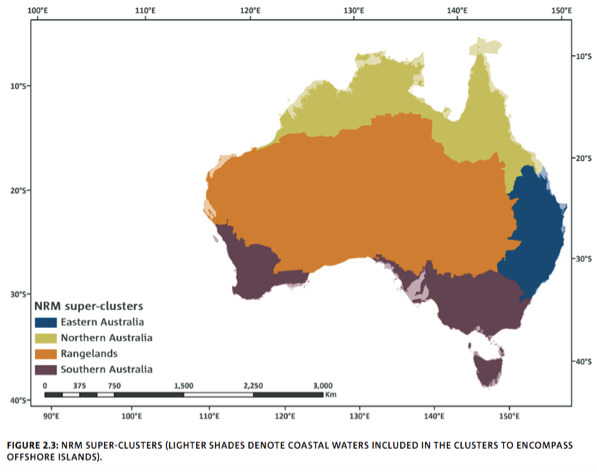 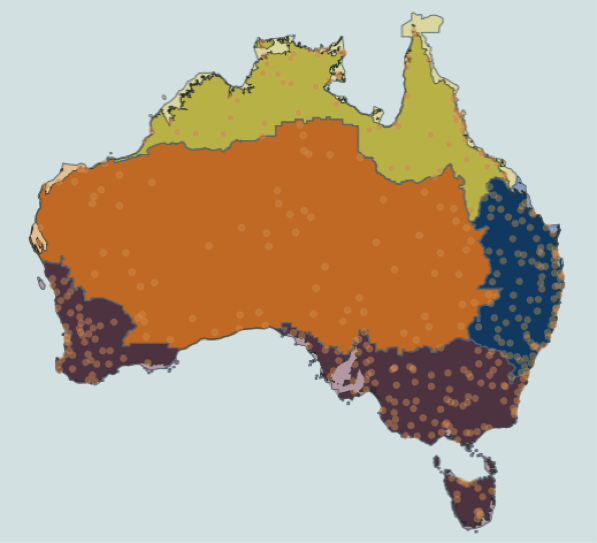 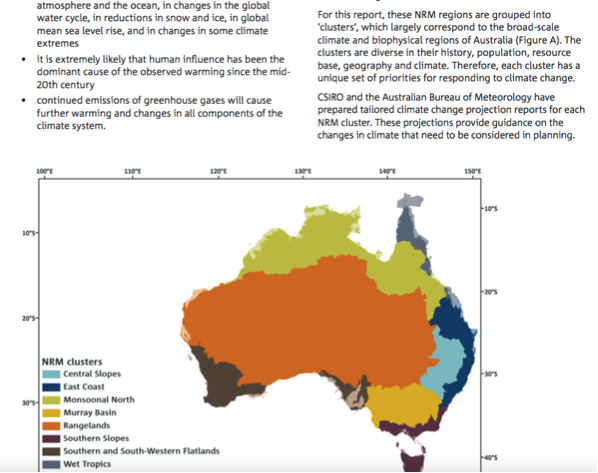