The REAL history of the IPA

2. 1808 Rum Rebellion – a coup by the NSW Corps with the central issue being currency. UK limits led to rum being the main currency medium of exchange. This issue lasted until Federation.

3. NWS grants permit for the Bank of NSW to become the first Australian Bank. UK disallows this making BNSW an illegal operation.

4. BNSW issues currency and finances expansion by pastoralists and Squatters.

6. 1835 John Batman heads business consortium and signs treaty with Port Philip natives to lease the land around the Yarra and the bay. Precedence set as British law did not apply so the Treaty was legally agreed under international feudal law.

7. NSW and UK dispute this treaty and retrospectively introduce British colonial law . This leads to (a) the invention of Terra Nullius (b) Squatter expansion into Vic and then SA (c) Genocide and theft of lands

8. Vic, being a non military colony, opposes NSW and lobbies, successfully for separation from NSW. Independent government set up with Latrobe as Lt Gov.

9. Melbourne grows on the back of new industry and exports of wool.

11. BNSW opens branch in Melbourne prior to separation and gold discoveries announced

29. Federal government assumes control of issuance of currency and attempts controls on banking.

7. ALP passes Electoral reform and establishes Commonwealth Bank (the people's bank) to comply with S53 of the Constitution. Opposed by non Labor, led by Senator Massey-Greene

12. Soldier settlement schemes developed (State and Federal) and set up ready for post war. Most end in disaster and bankruptcies.

REASONS TO BE CHEERFUL – PART 1

I have a story to tell and, by the time I am finished, I know that you will not accept a word of it as bearing any resemblance to the truth as you understand it. So be it. Lifetimes of conditioning and indoctrination by the beneficiaries of deceit are difficult to rectify but, what the hell. Here goes. Fortunately, for this purpose, white Australia has a short history, even though it inherited millennia of disinformation. Its active time of repression, although brutal, has been short and condensed, beginning, of course, in 1788; eighteen months before the storming of the empty, but symbolic, Bastille. In 1788 there were three global superpowers: France, the Netherlands, and Britain. Spain and Portugal, although still active, had waned and Germany and the USA were at their respective births. The Industrial Revolution had just commenced in England and has stimulated what we now call advanced technology and scientific research. For Britain, to both exploit, and develop, its newly found advantages, it first had to neutralise its opposition. They established a foothold in India to combat the Dutch in the East Indies while France concentrated on Africa. Open, and available, were the lands of the South Pacific and Australasia and all three powers made a beeline to the unknown hemisphere in the South. As luck would have it, a scientific expedition led by Captain Cook had landed in and claimed as naval trading bases, several small locations on the East coast of Terra Australis. At first, it meant very little but, after 1776 and the loss of the American colonies, its importance grew in the minds of the politicians led by William Pitt the Younger. They had two needs: to replace the loss of America and to find a new dumping ground for its policy of transportation. Crime and the overcrowding of jails weres, of course, self-inflicted problems but they faced a new threat. Dissent. Irish nationalism, the population shift from country to city, and destitution of this exploding population, and nascent ideas of political equality posed problems. An unknown bright spark in the Colonial Office dug out Cook's report and argued that several birds could be killed with the one stone. The Dutch threat was real with rumour telling of their expansion from the west to the mahogany coast, and the French were not far from challenging in the East. The first fleet, with convicts and a skeleton volunteer military force arrived in Cook's Botany Bay in late 1787; found it inhospitable and sailed up the coast where they found a deep water bay which they named Sydney Cove, some time in January 1788.

In the early days, things went quite well. The locals turned up for a sticky beak but, other than normal curiosity, there was little interaction. Communication, even sign language, was a barrier. They pretty much left each other alone but after the arrival of the second and third fleets, it all took a turn for the worse. The new settlement could not sustain itself and needed to expand outwards. Livestock needed more fodder and water and the plant crops struggled with the lack of nutrients, the heat, the storms, the fires, and the long dries. The botanic cornucopia of Joseph Banks was more hostile than imagined. Change was needed and change arrived in two forms: the arrival of free settlers and the recruitment of the NSW Corps who, in the absence of an ill Governor Philip, took matters into their own hands. The first military coup was gradual but effective as they allocated large parcels of land to themselves and controlled the new commerce of importation, mainly of alcohol. Most arrivals, convicts troops, and free settlers, were mainly men. Women were in short supply. The bleeding obvious happened. Women could, and did, charge high prices, not just for sex but for homekeeping, cooking, child minding and cottage garden work. There was one small problem. In its wisdom, the British had not supplied enough cash for financial transactions to occur so the residents improvised. Rum, supplied by the Navy as daily rations to the Corps and supplemented by imports of more, created Australia's very first free-market financial system. The NSW Corps became known as the Rum Corps and when, in 1808, Governor Bligh received orders to clamp down on this illicit trade, the second military coup, the Rum Rebellion, was staged. Bligh, fearing for his life, secreted himself but was found by armed, uniformed men who treated him with great respect and sent him back to Blighty where he was promptly promoted. Suddenly, a banking system was born and for credit, the land they allocated to themselves, became security. In 1817 this was formalised by Governor Macquarie and the new Bank of New South Wales, stockholder-owned, was born. As soon as they heard of this, the colonial office declared this bank to be illegal because only the Bank of England could grant a charter to any new bank in the colonies and Macquarie had exceeded his powers. NSW ignored these technicalities and kept going. Land grants were handed out to anyone with a shovel and convicts, marines, and settlers became farmers overnight and radiated further and further outwards, all financed by an illegal bank that on more than one occasion traded insolvent. So began the theft from, and genocide of, the natives. A new wave of free settlers were attracted but this time they came from the lowers rural aristocracy of England and Ireland and assumed a new role called the Bunyip aristocracy, or Squattocracy. The private ownership of Australia, sanctioned by a colonial government and financed by a dodgy bank, took off. Once out of sight of Sydney, they were also out of mind and behaved accordingly. Some of Australia's most wealthy and respected dynasties began this way and, some say, still behave the same. They spawned politicians, bankers, financiers, company heads, and all sorts as they spread, gun in one hand, bible in the other. Between them, they attempted to shape the culture of this new land in their own, corrupt, lawless, image. With one exception. Victoria.

From inception, Victoria was different from both NSW and Van Diemen's Land. Britain, its government, and its military had no involvement in its inception. Instead, a commercial group based in Northern Tasmania, funded an Aboriginal hunter to head north to see if any business could be established. In 1835, John Batman landed at the north end of a large bay and sought out the locals. Over the next 6 weeks, and with the help of some Aborigines from Sydney who did not speak the same language, did a deal. For an agreed annual payment, Batman leased the land around the mouth of a river. The local blackfellas had never seen a whitefella before but were happy with the deal. Batmania was founded when the first tents were erected after the first payment was made. The locals withdrew, respecting the rights of their new tenants and the settlers stayed within the land they had leased.. Gradually, tents became shacks, jetties landed ships and, through advertising in the Tasmania newssheets, people came. And then NSW told London 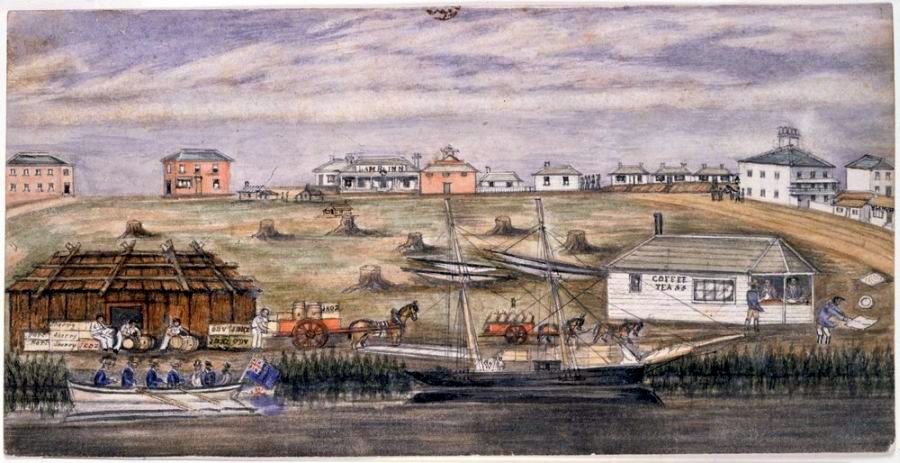 The quay of Batmania circa 1839  https://portphillippioneersgroup.org.au/pppg5hd.htm

REASONS TO BE CHEERFUL - PART 2

London was miffed. Batmania became Melbourne, after the minister, Lord Melbourne, and the whole region became a province of NSW called Port Philip who hadn't had anything named after him to date. The masterstroke was the invention of retrospective legislation. The treaty could not be allowed to stand because it recognised prior ownership under the pre-Colonial legal system of Feudal law, accepted internationally at the time as the law that operated in territories that had not been claimed by European powers. Personally, I'd love to see the High Court rule on this one given that precedence would be the issue. Anyway, British law was deemed to have begun before Batman's arrival, even though Britain had no idea at the time that it even existed or that anybody lived there. Neither did anyone in Sydney. Things had taken a turn for the worse, as far as the residents of Port Philip were concerned. They were further disgruntled when the Squatters from NSW, backed by their still illegal bank and the Rum Corps, moved into, and took, large tracts of land to the north, following the route of the Murray. The Melbournites stirred into action. They did not want to be ruled by Sydney and so began the separation movement. There wasn't much nationalism around in the 1830s and 1840s. The main objection, expressed by whalers, pastoralists, retailers and manufacturers was that Sydney could not be trusted, was inept and was riddled with corruption. Not much has changed.